Turmeric, a member of the ginger family, is a curry spice that contains curcumin, vitamin B3, vitamin C, beta-carotene, calcium, fiber, flavoinoids, zinc, and other nutrients. Besides its use as a spice, food preservative, and dye, turmeric has been traditionally used in Ayurvedic medicine in India, China, and Southeast Asia for nearly 4,000 years in the treatment of various ailments such as arthritis, ulcers, jaundice, wounds, fever, trauma, and psoriasis (Zhou, 2012).

Curcumin, a major component of turmeric, is a potent anti-inflammatory antioxidant. It is a pleiotropic molecule, meaning that it exerts numerous effects in the body via multiple signal cascades. The targets of curcumin include transcription factors like Wnt and Notch (which promote neuronal development), growth factors, protein kinases, inflammatory cytokines, enzymes, adhesion molecules, and apoptotic proteins (Zhou, 2012).

Curcumin can cross and stabilize the blood-brain barrier. It is one of the strongest inhibitors of amyloid-beta aggregation compared to numerous antioxidants, but it is not widely used in Western medicine in part due to doubts about its profitability (Hu, 2018). South Asian countries where curcumin is used daily tend to have lower rates of Alzheimer's disease than Western countries, where curcumin consumption is lower on average (Maiti, 2018).

Curcumin is a BACE inhibitor of the amyloid precursor protein (APP) pathway. In vitro, curcumin attenuates hyperphosphorylation of tau (Huang, 2014). Curcumin also inhibits Aβ and tau accumulation and enhances mitochondria and synaptic function in animal models (Kim, 2018). An 18-month, randomized clinical trial involving 40 patients indicated that curcumin could reduce amyloid (Aβ) and tau accumulation, leading to improved memory and attention in adults without dementia compared to controls (Small, 2018). Overall, curcumin is effective and delays disease progression in elderly individuals, but it is less effective in patients with severe Alzheimer's (Reddy, 2018). Strikingly, curcumin has been shown to stimulate neuronal stem cell proliferation, neuronal differentiation, and hippocampal neurogenesis by activating the Wnt/β-catenin pathway in AD models (Tiwari, 2014). These data suggest curcumin can prevent or delay disease progression, but may not reverse AD.

Curcumin was shown to reduce anxiety in obese patients after 30 days, but it had no effect on depression (Esmaily, 2015). Curcumin also improves survival of neurons and promotes neurogenesis by increasing Notch signaling (Liu, 2016).

Curcumin was found to inhibit proliferation and induce apoptosis in certain glioblastoma tumors (Rodriguez, 2018). It has also enhanced p53 and caspase signaling and promoted apoptosis in colon cancer cells (Waghela, 2015). Several studies saw decreased proliferation of breast cancer cells when treated with curcumin (Hasima, 2012). Curcumin's downregulation of NF-KB, a transcription factor that is constitutively expressed in numerous cancer cell lines and tumors, is suspected to be a major reason for its efficacy against pancreatic cancer (Kanai, 2014 & Zhou, 2012). However, these were in vitro studies, and clinical trials are needed.

It has been suggested that curcumin could reduce the need for chemotherapeutic drugs. Pretreatment of HeLa cells with 5 μM curcumin lowered the amount of paclitaxel needed to kill cervical cancer cells. Treatment with curcumin increased vincristine's cytotoxicity from less than 10% to over 70% in a multiple myeloma cell line. It did this by increasing caspases, inhibiting p65 nuclear localization, and downregulating NF-KB (Bharti, 2003). Finally, pediatric patients with relapsed brain tumors undergoing chemotherapy who were treated with curcumin had increased response compared to controls (Kunnumakkara, 2017).

Rats on a high-fat diet administrated curcumin showed enhanced diversity of gut bacteria (Kim, 2018). In a double-blind, randomized, placebo-controlled pilot study of 14 patients, curcumin was found to increase biodiversity of gut microbiota (Peterson, 2018). Curcumin has been shown to increase Lactobacillus and Bifidobacterium families and increase the abundance of butyrate-producing bacteria (Zam, 2018). Short-chain fatty acids (SCFAs) like butyrate are highly effective at reducing inflammation.

Curcumin improves glucose and lipid metabolism and facilitates insulin signaling. Curcumin mitigates inflammatory effects of obesity on the gut (Kim, 2018). It does this by decreasing macrophage infiltration into adipocytes, endoplasmic reticulum (ER) stress, and SIRT1 expression in adipocytes. In a 12-week, double-blind, randomized control study, a group of 118 obese patients were assigned to 1 gram of curcumin plus 10 mg of piperine (a bioavailability-enhancing compound) a day. Obese patients showed an increase in 'good' HDL cholesterol and a decrease in BMI and body weight. No change was observed in LDL cholesterol. (Panahi, 2017).

Consumption of curry spices rich in antioxidants, like curcumin and eugenol, improves post-meal endothelial function in healthy male subjects, which is beneficial for cardiovascular health. The participants who ate curry had an increased flow‐mediated vasodilatation response (Kunnumakkara, 2017).

Curcumin mouthwash was found to be almost as good as prescription chlorohexidine (CHX) mouthwash. The anti-inflammatory effects of curcumin, including inhibition of IL‐1β and CCL28, were at least as high as those of CHX (Pulikkotil, 2015).

A pilot clinical study investigating the safety and efficacy of curcumin in active rheumatoid arthritis patients showed an improvement in disease scores. Curcumin treatment was also found to reduce the stiffness and swelling in the joints of patients with rheumatoid arthritis (Chandran, 2012).

The safety and efficacy of curcumin is well-established, but pharmacokinetic studies reveal its bioavailability as a barrier. This is due to curcumin's instability, poor solubility and absorption, and rapid metabolism and excretion (Farzaei, 2018 & Vyas, 2013).

Efforts to improve the bioavailability of curcumin have met success. Various delivery methods are being investigated, including liposomes, micelles, and nanoparticles (Douglass, 2015). These delivery methods can enhance the therapeutic actions of curcumin. For example, curcumin conjugated with a biodegradable polymer enhanced apoptotic effects on human colon carcinoma cells compared to native curcumin (Waghela, 2015). 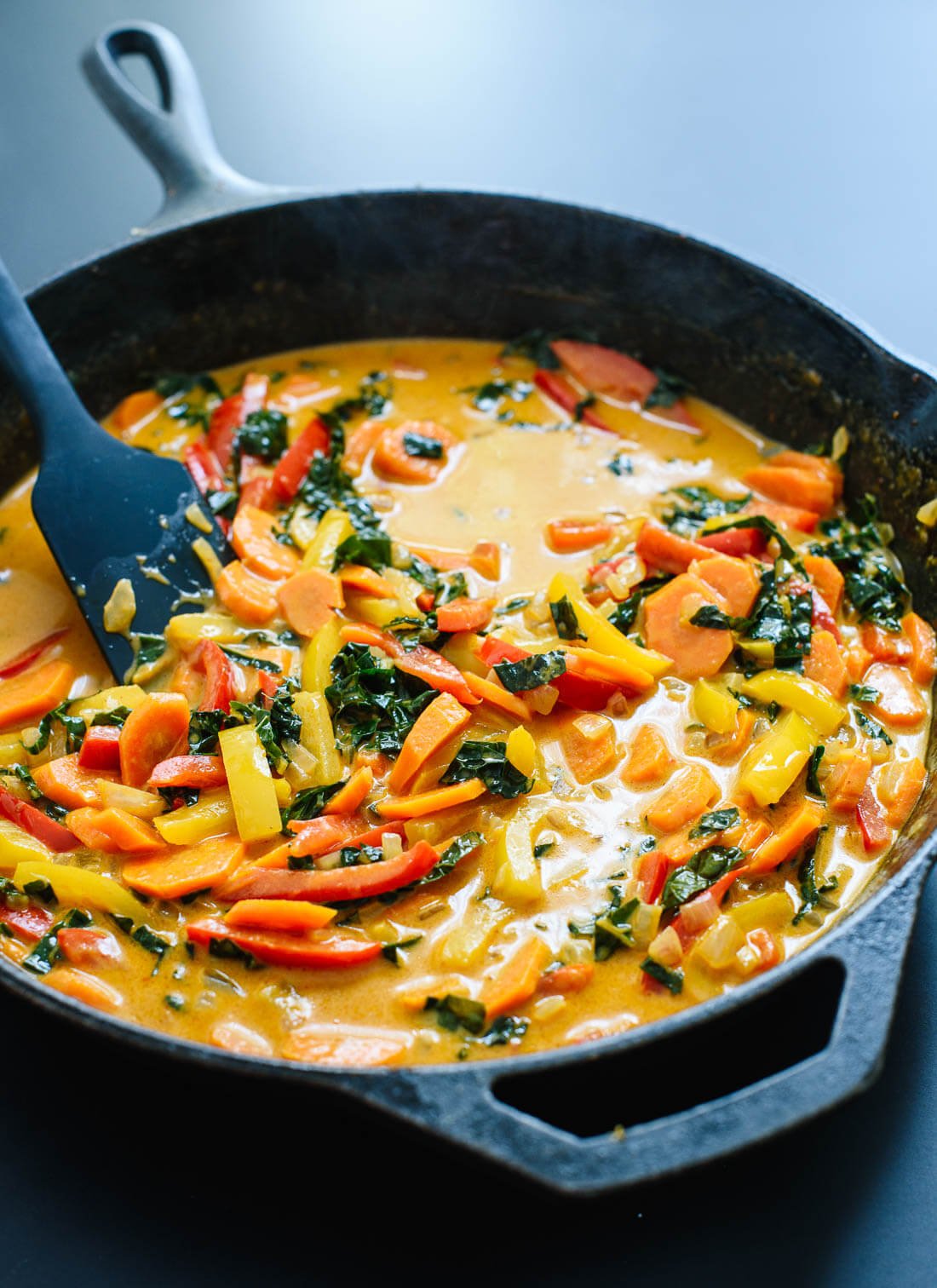 Heat it or eat it raw?

Cooking curcumin stabilizes it. Heating curcumin increased its water solubility by 12-fold (Kurien, 2007). Bioavailability of curcumin is greatly improved when heated to boiling point (Zou, 2015). This suggests curcumin is ideal for teas (particularly green tea and golden tea) and curries. However, boiling curcumin for 10 minutes was previously found to reduce curcumin content by 27% (Suresh, 2007). Thus, simmering is advised.

Cook in a vegetable oil

Because curcumin is fat-soluble, cooking it in olive oil or coconut oil (e.g. in the case of coconut curry) is recommended. This strategy increased the potency of curcumin's anti-cancer properties (Dahmke, 2014).

Black pepper combined with turmeric powder increases antioxidant activity in cooking (Zhang, 2015). Piperine is a major component of black pepper that has been used in clinical trials to improve curcumin's bioavailability (Panahi, 2017).

Use a milk base for teas

Eat it with quercetin-containing compounds

Personally, I have noticed less frequent colds and more energy when I incorporate turmeric into my diet daily. I put it into my steel cut oats, spice eggs with curcumin, brew turmeric tea, and love Indian yellow curry and Thai red curry. Given its widespread health benefits and its savory taste, the choice is simple.

22 Nutrients to Support Immunity Against SARS-CoV-2

How to Personalize Your Diet for Your Physiology: Quarantine Edition

11 Reasons Why There Is No "One Diet"